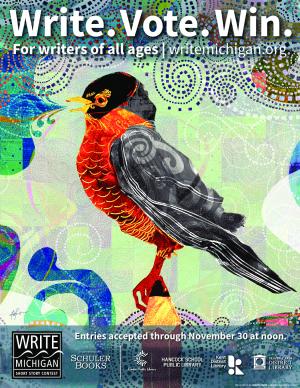 Canton residents and writers of all ages are invited to enter beginning September 1, with separate categories for youth, teens, adults and Spanish language (12 and younger). Winning entries will be published and receive cash prizes.

Stories can be submitted at writemichigan.org through Tuesday, November 30 at noon. Details include a 3,000-word maximum length; $10 entry fee for ages 18 and above, free for 17 and under; current Michigan residents only; all entries must be submitted online. Those who enjoy reading stories are encouraged to sign up to be a volunteer story reviewer.

Winners will be honored during an awards ceremony in March and their story will be published in an anthology by Chapbook Press.

Show off your writing skills and visit writemichigan.org for more details and to enter. 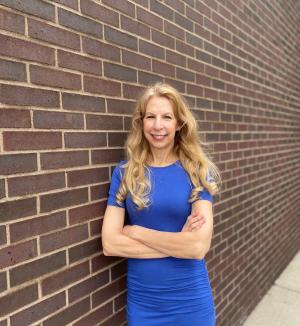 The Canton Public Library wishes a fond farewell to one of our longest-serving staff members, Circulation Assistant Carol Siemieniak. Carol’s warm smile makes everyone feel at home, and her personality has brought fun and laughter to staff and library patrons alike. She has dedicated her time at CPL to making the library a welcoming place for everyone.

Carol first joined the Canton Public Library as a receptionist in 1988, one of the first individuals hired as part of the library’s new building opening. She later moved into a Circulation Assistant position, where she has served the Canton community for the last fifteen years.

“Carol has put her heart and soul into this library and it shows in all of the friends she has made with CPL staff members and the many patrons who look for her smiling face when they enter,” Circulation Supervisor Barb Gudenburr said. “She has been an inspiration to others to be empathetic to everyone.”

When it comes to library memories, Carol has 33 years’ worth to share. Her particular favorites include the library’s 25th Anniversary celebration in 2005, and former President George H.W. Bush’s campaign visit to Canton Public Library in 1992.

“We stood behind the Circulation Desk, and he came up and shook hands with us,” Carol shared about her experience meeting the former President. “They sent us official White House photos of us shaking hands with the president. It was so exciting.”

As a Circulation Assistant, Carol discovered a love for connecting with library patrons. Carol expressed that she was very shy when she started at CPL, but getting to know the friendly faces that came to visit the library helped her come out of her shell. “My job has been really rewarding in that I got to know so many people,” Carol said. “It’s been such a ride and I’ve had such a good time.”

Carol will retire to spend time with her new granddaughter on June 30. She will miss her coworkers dearly, and the many patrons she meets on a day-to-day basis. Members of the community are invited to stop by and send best wishes to Carol before her last day on June 30.

We want to help you have the best summer possible with our 62 Days of Summer program. Watch this video for a quick explanation of how the program works, check your mail for a packet from us, then come back to our website for ideas and inspiration. We've got 62 ways to do 62 Days of summer reading, activities and programs at your own pace and comfort level. Our librarians have put together lists of reading suggestions, recommended activities and ways to safely engage with your neighbors and community. See you online!

Do you enjoy a stroll down the Rouge River Trail? Have you stopped by the Canton Farmer’s Market? Canton residents are invited to provide input at a series of Open Houses as a key part of the strategic process of updating Canton Leisure Services’ Five-Year Master Plan. Members of the community are invited to submit feedback on:

Canton Leisure Services’ revised Master Plan will ultimately serve as a guide in planning for acquisition, development, and improvements to Canton parks, and trails, as well as Leisure Services facilities, programs, and services over the next five years.

Members of the Canton community are invited to submit comments at the Master Plan Open Houses or online at www.cantonfun.org. For more information, visit www.cantonfun.org or call Leisure Services Director Greg Hohenberger at 734-394-5360. 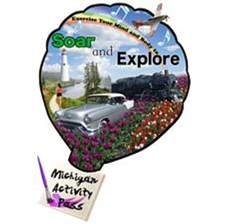 The Michigan Activity Pass (MAP), presented by The Library Network, is a partnership between Michigan libraries and hundreds of Michigan state parks, historic sites, cultural attractions, campgrounds, and recreation areas.

Library patrons can access hundreds of participating institutions by visiting the Michigan Activity Pass website to print or download a pass to their mobile device. Some partners offer complimentary or reduced price admission; others, discounts in their gift shop or other exclusive offers for MAP pass holders only. Each Michigan Activity Pass expires one week from the date it is printed or downloaded.

As of May 2021, thirteen metroparks, including Delhi Metropark in Ann Arbor and Lower Huron Metropark in Belleville, are now included in MAP passes.

Here is just a small sample of places that are open and waiting for you:

For the latest information before visiting, check out MAP’s Facebook page or website. Patrons are encouraged to use a mobile pass and to check the partner destination's website for any restrictions currently in place.